Have you noticed that the stars in the sky are actually a beautiful array of colors rather than the white light that we can see with the naked eye? Or are you simply wondering what colors the different stars are?

We are going to answer all of your questions when it comes to all of the different colored stars that conquer the night sky, and we will even look at why these colors differ.

When you look up at the sky, you can usually just see blackness, and on clearer nights, the stars come out for us to see. However, when we look through a telescope, we can see that the stars in the night sky are not what we originally anticipated.

The sky becomes a stunning array of bright colors, and we can use these colors to tell the differences between them. If you have looked through a telescope or seen close-up pictures of the stars, then you will have seen their beauty.

We are going to provide you with the ultimate astronomer’s guide to seeing a stellar rainbow and tell you all about the different stars in the sky. 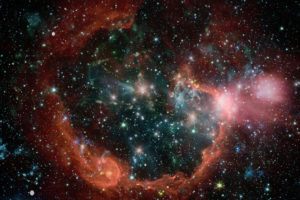 What Are Stars Made Of?

Stars are actually much bigger than you might think that they are, and they are mostly made up of hydrogen and helium, which works to produce light and heat from the burning that is happening at the core of the star.

The birth of a star will take place inside of a hydrogen-based dust cloud, which is called a nebula. Over thousands of years, gravity will work to cause pockets of dense matter inside of the nebula to collapse under their own weight.

The increasing pressure will cause the temperature to rise, and after millions of years, when the core temperature is around 27 million degrees Fahrenheit, nuclear fusion will begin. This will ignite the core of the star, and the next cycle will begin.

The stars in the sky that we can see are actually light-years away from us, and there are billions of them in the universe.

It is impossible to know for sure exactly how many stars that there are, but astrologers have estimated that there are around 300 billion stars in the Milky Way alone. This just goes to show how many that there are in the entire universe.

What Color Are Stars?

Stars are a variety of different colors, and when we study them, we can really see what these colors are.

Though we can look and see what the color of the stars look like, to be able to specify the exact color of a star, an astronomer would typically measure a star’s apparent brightness through different filters.

These filters will only transmit the light from a certain narrow band of wavelengths. These wavelengths are the colors. If you were to hold a colored piece of glass up to your eyes, you would only see that color being let through with the light.

The same applies to the filters that are used to transmit the light from the wavelengths. This is the best way to determine the true color of a star with accuracy.

A common set of filters that astronomers use will measure stellar brightness at three different wavelengths that correspond to ultraviolet, blue, and yellow light.

Each filter is named retrospectively, with U being for ultraviolet, B being for blue, and V being for yellow, though it stands for visual.

These filters will actually transmit light near the wavelengths of 360nm, 420nm, and 540nm. The level of brightness that is measured through each of these filters is typically expressed in magnitudes, and the differences between these magnitudes are called a color index.

Why Are Stars Different Colors?

The stars in the sky are truly amazing to look at, and it can make you wonder why they are the way that they are. When we look at the stars with just our eyes, they can all look relatively similar, but they are actually all in different shapes, sizes, and also colors.

Through witnessing, observing, and documenting, astronomers have been able to figure out the differences between certain types of stars, and we can use these characteristics to tell them apart.

We now know that the color of a star is determined by its composition and effective temperature, and these colors can range from white and blue to yellow and orange, and lots of other colors in between.

Stars emit light, which is a combination of different wavelengths, and the color of a star can even change over time as it gets older. We will explain more about the color of stars and their temperatures below.

One of the main things that will affect the color of a star is its temperature. When a star gets hotter, the radiated energy will increase, which will lead to shorter wavelengths.

What this means is that when the star increases in temperature, the light that it emits will become closer and closer towards the blue spectrum of light.

This works the opposite way when the star decreases in temperature. The color of the star will change when the temperature changes.

There are also other things that will affect the color of a star. One of these factors is referred to as the Doppler Effect, and when we look at things like sound and light, the frequency can increase or decrease based on the distance between the star and the person looking at it.

Another thing that can affect the color of a star is its age. During the majority of a star’s life cycle, it will be burning hydrogen at its very core. This process will create a lot of energy, which makes it appear to be blue in color.

As the star gets older, there will be less hydrogen available to burn, which will lower the amount of energy that it is able to create.

This is why younger stars look much bluer, whereas older stars look more red in color. This is how the color of a star can actually reveal a lot about how old it is.

What Are the Colors of the Coolest Stars?

This means that when we are looking at the coolest stars, we are more than likely going to find that they are red in color. In the event that the surface temperature rises, the color will change to an orange then a yellow color.

The hottest stars in the sky will glow a lighter blue, and then one step further than this would result in a darker blue color. We will leave the order of star colors from the hottest to the coldest below.

Why Are Some Stars Brighter Than Others?

Something that you might notice is that there are some stars that shine more brightly than others. The brightness of a star is due to how much energy the star is emitting, which is known as luminosity, and how far it actually is away from Earth.

Sometimes, a star might seem like it is brighter than another, but this could just be due to the fact that it is further away. This can make the closer star look brighter, even though it might not be.

Other times, the star is actually brighter, and this is due to the fact that it is producing a higher level of energy, which makes it shine that extra bit brighter.

How Long Does it Take To See Light From a Star?

The light from a star will actually take a very long time to reach the Earth.