Virgo is perhaps best known as one of the star signs used in astrology.

But few people, beyond perhaps those who are considered to be Virgos, know much about the constellation itself. 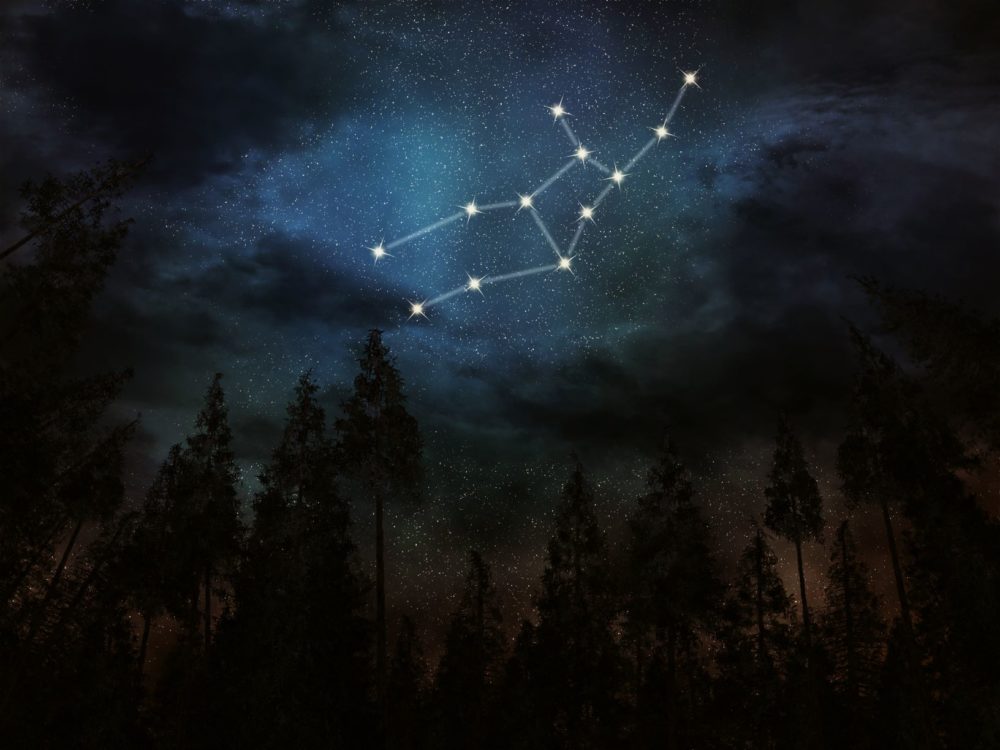 The Location of Virgo

Before we get into the stories and beliefs around the Virgo constellation, let’s position ourselves. Virgo is the second-largest constellation in our solar system. So, you have a pretty good chance of spotting it.

The Visibility of Virgo

Due to the movement of the Earth, many cultures have long believed that the Virgo constellation moves. This is because it is visible in the northern hemisphere during the spring and summer months.

In the northern hemisphere, the Sun will pass through the Virgo constellation from September 16 to October 30. But this will only be between the years 1990 to 2062. Although this is a controversial topic, Zodiac signs are subject to change.

The Stars of Virgo

Virgo takes up a lot of space and is made up of a lot of stars. The constellation of Virgo has a total of 15 named stars. These are:

Of these stars, Spica is the brightest. In fact, Spica is the 16th brightest star visible from Earth in the night sky. Spica is midway between the subgiant and giant stages of its evolution and is around 12,100 times brighter than the sun.

So, you should have a pretty easy time spotting it.

The Space Around Virgo

When we look up at the sky on a clear night, you will be able to see the moon, the stars, and perhaps some other planets, depending on the time of year. But there is actually a lot more going on than you might think.

As mentioned before, there are 15 named stars in the Virgo constellation. But around these stars, there are 35 exoplanets (planets that orbit stars other than the Sun), at least 11 Messier objects, several galaxy clusters (one of which has a black hole), and the first quasar ever to be identified.

It is understandable how our ancestors created stories to align with the stars. They appear to be simple and small. But there is so much more out in space than they could ever have imagined.

But even these constellations aren’t identical. Some join the stars up differently. Or even join up different stars.

In Hawaii, there are some who connect Spica to several of its surrounding stars but in a very different way to Virgo but it is named Iwikuamo'o “the backbone”.

The Discovery of Virgo

For something as old as a star constellation, we cannot claim that any single person “discovered” it. Due to how large and bright the Virgo constellation is, it’s highly likely that it was observed by many people before it was recorded.

But, the honor of the first recorder of the Virgo constellation goes to Ptolemy. Claudius Ptolemy was a great mathematician, astronomer, philosopher, geographer, and astrologer of the 2nd Century CE.

As mentioned before, constellations are not considered to be scientific. But that does not stop people from believing they have an important impact on human lives.

In Zodiac astrology, Virgo is considered to be an Earth sign. This aligns with several myths associated with the constellation which feature connections to the earth, harvest, motherhood, and the concept of Mother Earth.

Although there is no scientific basis for these claims, people born under the Virgo constellation are considered to be loyal, kind, practical, hardworking, analytical, smart, and sophisticated. These qualities do, in some ways, relate to the women in the myths. But they are not directly related.

The Naming of Virgo

Interestingly, Virgo is the Latin for “virgin” or “maiden”. This is the perception of the Virgo constellation across several cultures. Even those that have slightly different stars making up the constellation.

This is perhaps a strange name for a constellation. But, if you have any knowledge of constellations then you will know that this name is very likely to be associated with its origin myth.

But which one? There are several myths associated with the Virgo constellation. Because it is the only constellation that is considered to have a female symbol, all of the stories relate to women.

In many Western cultures, the constellations, especially those considered to be within the Zodiac, have an origin story from either Roman or Greek mythology.

But these celestial shapes have been sitting in the night sky for longer than we can imagine. So there are so many different stories, myths, and beliefs associated with them.

This is true of Virgo. So, what are these myths? As Virgo is the only female figure within the Zodiac, she is associated with many different female goddesses and deities. But she cannot be claimed for every goddess due to her name.

Although many ancient myths of every culture have an obsession with the concept of female virgins, female virginity, and female “purity”, the name does not fit with very many female figures.

Virgo has, however, been associated with the Virgin Mary, Demeter, Proserpina, Parthenos, Isis, Ishtar, Aphrodite, Ceres, Inanna, Erigone, Astraea, and more. Virgo also has connotations with the concept of “Mother Earth” and the connection that some people feel between women and the natural world.

Of course, these are all fascinating stories which we will go into in more detail. But it is important to remember that constellations are not a scientific concept. It is not completely disregarded that the stars can be joined up to make a pattern.

And we can perceive these patterns as we choose and assign our own meanings and beliefs to them as we please. But they are not considered to be classifications. These stars are interesting enough without our forcing them to be associated with our human stories.

That said, these stories are fascinating and can reveal a lot about ourselves as human beings, our cultures, and our relationship to the night sky and the Earth below it. So, let’s dive into some celestial tales.

One of the Greek myths related to Demeter. Demeter is the goddess of agriculture and the mother of Persephone. The story of Demeter and Persephone is one of the most famous.

But it is mostly the parts that directly relate to Persephone that are most often recounted. When, in fact, the crux of the story actually hangs on Demeter.

As Demeter was the goddess of agriculture, she was also the goddess of the harvest. One account of the myth begins by claiming that the Earth was once in perpetual fruitfulness and bounty.

When one day Hades, the god of the underworld, kidnapped Persephone and took her to the underworld. Demeter was so upset and distraught by this that she plunged the Earth into winter.

Hades was determined to marry Persephone but Demeter would not allow this. Even when Zeus advised her to. Eventually, Zeus sent Hermes, the messenger of the gods, to command Hades to return Persephone. Hades could not ignore the instructions of Zeus.

However, when Persephone returned from the underworld, she declared that she was in love with Hades. This caused Demeter even more despair and anger.

To resolve this, Zeus chose to allow Persephone to spend half the year in Hades and half on Olympus with Demeter. This is, then, the reason for the seasons changing. The winter months are when Demeter is in the underworld and the summer is when she is on Olympus.

When viewed from the Northern Hemisphere, the Virgo constellation cannot be seen in the early evening sky during the colder months and early spring. So, the visibility of Virgo coincides with the beginning of spring.

Isis was associated with agriculture and fertility. As was her consort, Osiris. In keeping with the Greek and Roman myths, Isis is also associated with motherhood and mourning.

But Isis was an incredibly important figure in ancient Egypt. Her name is a Greek interpretation of an ancient Egyptian word for “throne”.

As with all myths, the story of Isis differs over the centuries. But the most famous myth relates to her consort, Osiris, being murdered. Because of this story, Isis is idolized as a wife and mourner.

The myth of Isis, developed by the priests of Heliopolis who were followers of the god Re, states that Isis was the daughter of the earth god Geb and the sky goddess Nut. Isis married Osiris, the king of Egypt (and her brother), and became queen.

Isis was a beloved queen and taught the women of Egypt how to sew, weave, and brew beer. This is one of the reasons she is associated with women and was considered an idol for them.

The constellation in Egyptian mythology is not associated with a virgin woman but is still perceived to be a woman reclining.

The main crux of Isis’ story occurs when her brother, Seth, becomes jealous of Osiris and murders him. He does this by trapping him in a wooden chest, covering it in lead, and throwing it in the Nile.

Seth becomes the king of Egypt but Isis cannot forget her husband. She eventually finds him in Byblos and takes him back to Egypt. Seth is furious at this and dismembers Osiris’ body and scatters the pieces.

Isis transforms into a bird and gathers all of the pieces. She then wraps them together and brings him into a half living half-dead state. Eventually, Osiris finds his way to the underworld and becomes king of the dead.

After this, Isis gives birth to Horus whom she hides until he is fully grown. Horus then avenges his father in battle with Seth. During the battle, Isis wavers and takes pity on Seth.

For this, Horus beheads his mother (but this is soon after reversed by magic). Eventually, they reconcile and Horus becomes the king of Egypt.

The Virgo constellation is one of the most well-known. This is partly due to it being included in the Zodiac. But also because it is the only constellation associated with a woman.

Because Virgo is the sole female constellation, almost every goddess and female deity is associated with it.

But, this does not mean it isn’t fascinating. Virgo has been important to many cultures due to its connection with agriculture, harvest, spring, and creation. Virgo has positive connections for almost every culture.

And it is also easy to spot, depending where you are on the Earth. So, next time you’re looking up at the night sky, try to spot Spica and the surrounding stars.