There are five majorly visible planets you can see from earth, these are Mercury, Venus, Wars, Jupiter, and Saturn.

Then there are two that are a little harder to see, Uranus and Neptune, these are exceptionally faint and after often shoved aside by many amateur astronomers, due to the difficulty of spotting them. 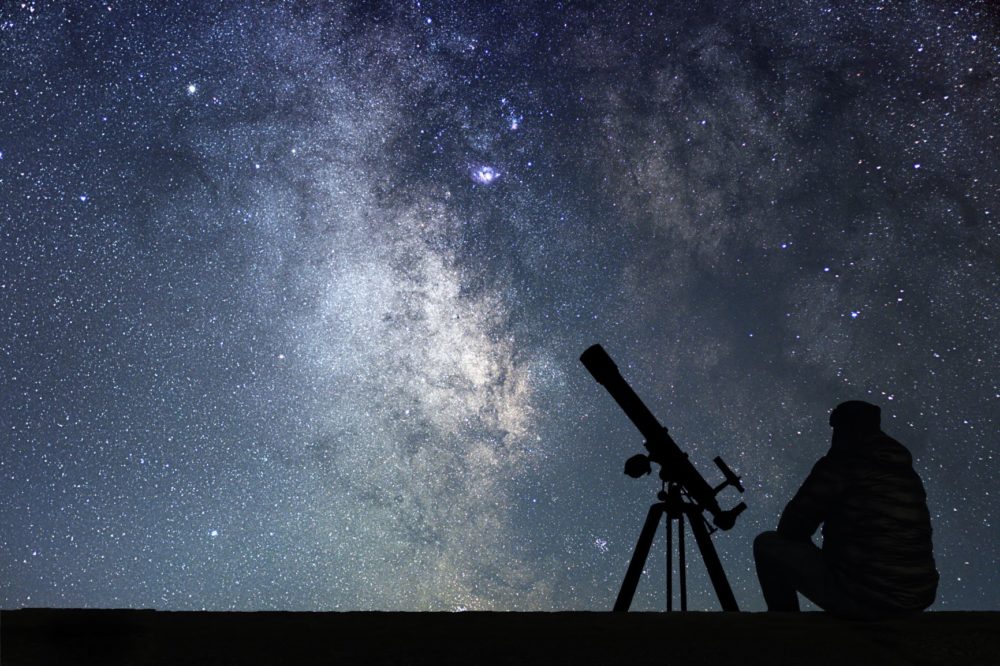 If you are up to the challenge they can be seen by a dedicated visual observer. And, they are not that hard to spot if you know where to look.

We want to look specifically at Uranus. It can be rather challenging since it is one of the planets furthest away from earth, it wasn’t even discovered until the invention of the telescope.

A beginner may want to cross this planet off their list, for now, however, if you are feeling confident, have good level equipment, and great knowledge of stars and constellations, you can certainly do it.

Can you see Uranus through a telescope?

Yes, you certainly can, but this does depend on your optical equipment and its aperture. You shouldn’t set your expectations too high and anticipate seeing a giant blue disc with a clear atmosphere, even if you are using a very high powered telescope.

If you want that you will have to gain access to the Hubble Telescope.

We recommend a telescope of at least 300mm or 12 inches in diameter, with a long focal length and a good quality camera and planetary filter.

There are rare occasions in which people have managed to see Uranus through an amateur telescope, in their backyards.

How to find Uranus

Uranus can be hard to find in the night sky, especially if you are in an area that has a high level of pollution. It is so far away that to the naked eye or with an amateur telescope it is unlikely you would see much more than what looks like an ordinary star.

However, modern technology has become a lifesaver and there are so many mobile apps now that can provide you with the assistance to know where everything is in the sky; constellations, stars, planets, and more.

This planet is the only planet named after a Greek God, all the others are named after Roman gods. Uranus orbits the sun once every 84 earth years and has an axial tilt of 98 degrees, which is fascinating and very unique, but we will go into more detail about this later.

Looking at Uranus through a telescope will differ depending on what kind of telescope you have.

This planet is very far away from us, but the best time to view it is when it is in opposition, at this time it is only 2.8 Billion KM away from earth.

Uranus is best viewed at opposition. This is when the planet is closest to us. If you are using a standard home-use telescope then this is when you will get the best view.

When Uranus is in opposition, it is placed in orbit on the other side of Earth to the Sun. At this point, the planet’s magnitude shines at 5.7 which makes it slightly brighter and easier to see than otherwise.

Even at this closest point to the Earth, it is very unlikely that you will be able to distinguish any details of the planet. Uranus will likely look more like a star, especially without a telescope.

With a telescope, it will look a bit more like a blueish ball, it also tends to have a sort of 3D effect, that some other planets lack. If you want a good look then we recommend using a 9.25-inch telescope to get the best view.

Although it is a pricier option, you get a much better view of Uranus, and may even be able to see its distinctive blueish hue.

If you are interested to see what kind of images a telescope like the Hubble, brings up when looking at Uranus then you are sure to find some amazing images.

Although it is not certain if there is any more space explorative intent to look any more into this mystical blue planet, the images already captured are wonderful. You can even see Uranus’ rings through infrared imaging. It is a mysterious and interesting planet.

Finding Uranus in the night sky

Uranus orbits the sun at around nineteen times the distance from Earth, so it is very tough to spot. In the right conditions, and knowing where to look will help you. You will also need absolute darkness and a clear sky, so cities or towns are probably best avoided.

The distance it travels means it moves very slowly across the night sky and so can be found in the same area of the night sky throughout a great deal of 2021 and some of 2022.

If you are wondering about whether or not it is worth you going stargazing and on a hunt for Uranus, you can use an app to find it, check that the skies are clear, cloud cover is not your friend.

Or if you want to do a thorough check to see where Uranus is, then you can always have a look at the Hubble telescopes online feed. This will help you see whether or not Uranus is in the sky at the time you are looking, updating a monthly feed.

When can you see Uranus?

Aside from checking when you can see Uranus online, knowing how visible it will be year by year is a great help. For example; in 2021 it is anticipated that it will shine brightest in early January and late August until the end of 2021.

It will not be visible from April until June in 2021, and it will reach opposition in early November 2021. It is best to look for it in the winter months in 2021; January, February, March, and December. It will likely also still be visible in January 2022. It is spending this year in particular in the Constellation of Aries.

Knowing which constellation Uranus is in will help you to locate it easiest, so no matter when you are looking for it, it is always ideal to check where in the sky, and what constellation it will be in.

We don’t know nearly as much about Uranus as we know about the other planets. We know plenty about our neighbors, Venus and Mars, as well as the two astounding giants, Jupiter and Saturn.

But Uranus and Neptune always seem to get a little left out, despite how much they have to offer. Uranus is a fascinating planet with a lot of individuality. Let’s find out some more about what you’re looking up in the sky, looking at.

Uranus was discovered in 1781 by an astronomer named William Herschel, he originally thought it was a comet or a star. It took two years before it was finally accepted as a new planet thanks to the observations of another astronomer, Johann Elert Bode.

Bode named the planet after Uranus, the Greek God of the Sky. Rightly so, since it shares our skies blue color.

How big is it and what is it like?

Uranus is huge, not that it looks like it from your home telescope, or in documentaries. It is about four times wider than Earth is, in the sense of size, Earth is a tennis ball, where Uranus is a soccer ball. Uranus is also not the ideal place for a vacation, it looks cold and it is.

It is an ice giant, most of its mass is a hot dense fluid of icy materials, such as water, methane, and ammonia. It is also very gassy, its atmosphere is made primarily of hydrogen and atomic helium as well as small amounts of methane.

How does it rotate?

Uranus is like Venus, rating from east to west, but it is even more unique.

Not only does it rotate unlike most other planets, but it also rotates on its side, with its poles horizontal.  Its equator was last seen face on in December 2007and its south pole will be seen in 2030.

Does Uranus have rings?

Uranus does have rings, much like Saturn. It has 13 rings, the inner rings are narrow and dark, whereas the outer rings are brightly colored.

Due to the unusual tilt of this planet, the rings seem vertical.

Does Uranus have a moon?

Uranus is a bit greedy, it has 27 known moons! They are all named after literary characters from the works of Shakespeare and Alexander Pope.

One of the moons sparked interest in the past, showing subsurface oceans much like one of Jupiter’s moons Europa, which could be a candidate for life forms. We will have to wait and see.