Named after the Roman God of the Sea, the ice giant Neptune is the eighth and most distant planet in our solar system and is famously characterized by its bluish hue.

Not only is Neptune more than 30 times as far from the Sun as Earth, but it is also the only planet in our solar system that is not visible to the naked eye and the first predicted by mathematics before its discovery in 1846. Neptune is 17 times the mass of Earth and is slightly more massive than its near-twin, Uranus.

Neptune orbits the Sun at a distance of about 2.8 billion miles (4.5 billion kilometers).

As a result of its distance, Neptune cannot be seen without an optical aid such as a telescope or binoculars and you must know exactly where and when to look to find Neptune if you want to have a good chance of seeing it. 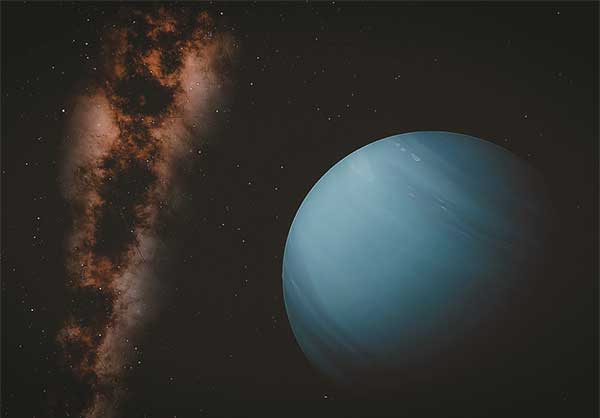 So let’s break it down.

Finding Neptune in the Night Sky

While there is excellent planetarium software on the internet that will help you identify Neptune’s location at any given time, it can still be quite the challenge for an inexperienced skywatcher. We’re here to help.

For any solar system planet beyond Earth’s orbit (more commonly known as a superior planet) opposition is considered as a special event.

When any planet outside of Earth’s orbit is at or near opposition, Earth comes closest to that planet for the year, and that planet, in turn, shines most brightly in our sky. However, even at opposition, Neptune is not bright, making it particularly tricky to spot in our solar system.

At a peak magnitude of 7.8, this bluish-hued planet is only visible with good binoculars or a telescope. Finding Neptune in the sky depends on a number of factors.

To figure out exactly where Neptune is in the sky, you can use planetarium software such as Stellarium, which allows you to simulate the celestial sphere at any time, day or night, on your computer.

A handy tip to remember when looking at the celestial sphere is to locate the star Aquarius, as Neptune is currently located amongst the stars of Aquarius. Whenever Aquarius and Pisces are in the night sky, it is easier to look for Neptune as it will be in approximately the same place.

To find Neptune, you will first need to locate the stars Phi Aquarii and Hydor in Aquarius. Generally speaking, these two are relatively bright stars, shining at magnitude 4.2 and 3.8, respectively.

Phi Aquarii, although faint, is easily visible to the eye alone on a dark night, so be sure to start there when you’re looking for Neptune.

There is an array of equipment out there to help you see Neptune. As it is only possible to see Neptune through a telescope or a pair of binoculars, you will need the correct equipment to aid you in your search for this ice giant.

As with observing any planet, the best telescopes for observing Uranus and Neptune are long focal-length and large aperture scopes.

Generally speaking, you should be able to see Neptune through a telescope that is at least an 8-inches with a magnification of no less than 200x, simply to see Neptune as a tiny blue disc of light.

You may find that you want to enhance your view of Neptune, and if so, you should consider buying an eyepiece that will magnify your view by 50x.

There are also multiple planet finder apps that you can download to your phone and use in conjunction with your telescope to help you locate Neptune. This is a great and easily accessible way of locating Neptune quickly, as you’re rarely without your phone!

The best time to see Neptune varies throughout the year 2021. Neptune takes about 16 hours to rotate once (a Neptunian day), and a whopping 165 Earth years to orbit the sun (a Neptunian year). In 2011, Neptune completed its first 165-year orbit since its discovery in 1846.

As Neptune takes so long to orbit the Sun, then, we can find Neptune in Aquarius throughout 2021. The following guide below provides information regarding Neptune in 2021 so that you can mark your calendar on when it is best to try to spot the ice giant.

Not visible: End of February to May. Neptune is also in conjunction with the sun on March 10th, meaning that it’s impossible to see.

Visible in the morning sky: Under dark sky conditions at the end of July, although unable to reach peak altitude. In August managing to reach an altitude of more than 30º.

Visible all night: September to October, well placed in November and at the start of December, but succumbs to twilight toward the end of the month.

Neptune’s distance is so great that in the months that it is visible, its visibility doesn’t vary too much, even as it reaches its closest approach to us and opposition on 14th September 2021. Its disc size and brightness increase a fraction, but not enough to be noticeable from Earth through a telescope.

For a number of weeks on either side of its opposition date, Neptune is visible all night. However, as the season begins to change on the arrival of December, Neptune begins to set earlier.

Typically speaking, Neptune is not a bright planet, which is why it can be notoriously difficult to spot. Through a telescope, Neptune's apparent size is a tiny 2.4 arcseconds at its closest approach to us.

Even with large magnification in a bigger sized telescope, the best you'll see of Neptune is a disc as opposed to a pinprick of light with a bluish hue to it.

At a magnification of 100x, you will be able to see the predominantly blue hue as a result of the absorption of red and infrared light by methane in Neptune’s atmosphere. Neptune is our solar system's windiest planet.

How many moons does Neptune have?

Neptune has 14 known moons, which are named after sea gods and nymphs in Greek mythology. Neptune’s moon, Triton, has a tenuous atmosphere of nitrogen, and at 1,680 miles (2,703 km) in diameter, it is larger than the planet, Pluto! Pretty impressive, right?

What is so interesting about Triton is that it moves in retrograde (backward) orbit, and is the only spherical moon of Neptune, as the planet's other 13 moons are irregularly shaped.

Those who have access to a large telescope of 12 inches or more might even be able to get a glimpse of Triton, which is very close to Neptune itself.

Although Neptune can be difficult to spot in the night sky, don’t be afraid to give it a go!

In this article, we have provided you with some tips that will hopefully help you in your search for it. With the right equipment and information, you’ll be well on your way to being able to spot the ice giant, Neptune!