Knowing how to read a star chart is an essential part of astronomy.

Learning how to read one can be a difficult task, but once you have mastered this skill, you will be able to gaze into the night sky, and pinpoint planets, nebulae, stars and many more objects in space. 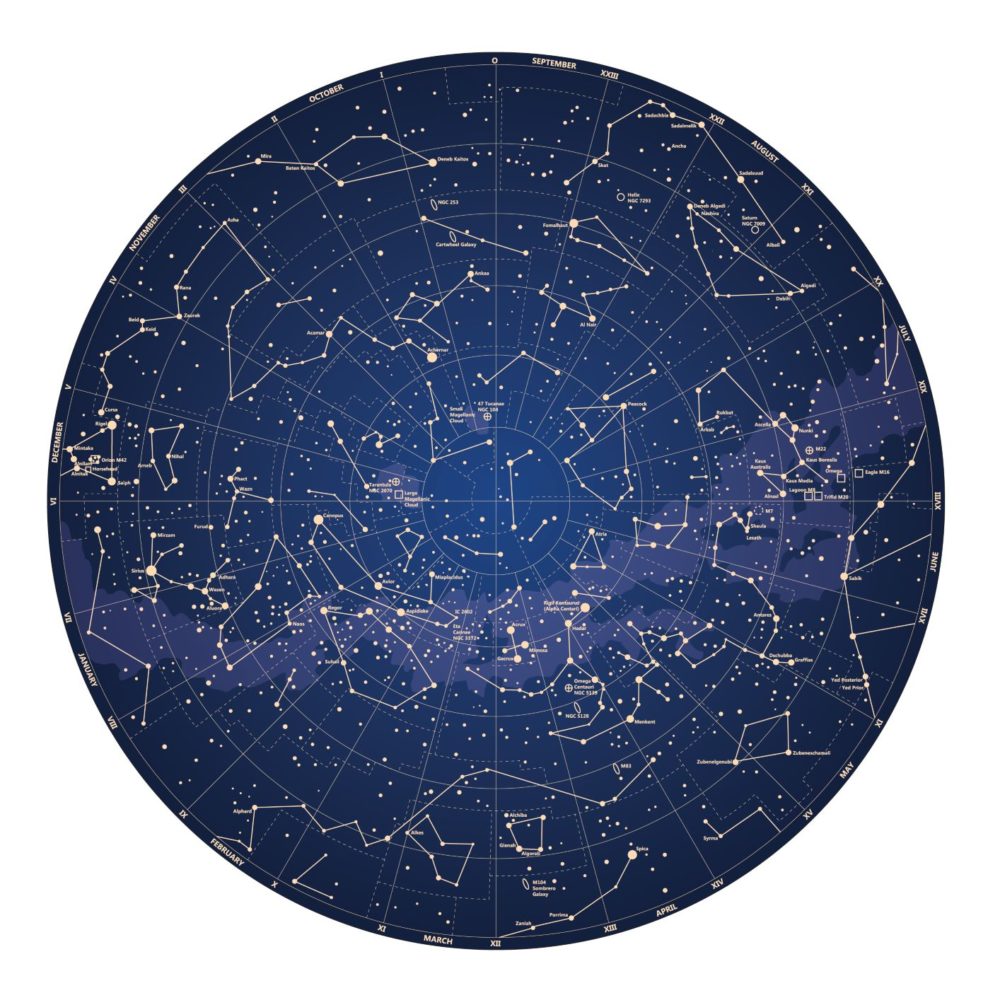 It can seem overwhelming, and reading a star chart like a pro will take a lot of time and practice, but once you have cracked it you will be able to find constellations, stars, and you will enjoy using a telescope so much more!

With this guide, we will help you understand what star charts are, how they work, and how to read one successfully.

What is a Star Chart?

When you gaze into the night sky, you will be able to see more than 6,000 stars, up to 88 constellations, five planets, the Moon and much more, just with the naked eye.

A star chart, or a star map will help you understand which constellations are which, and help you identify objects within the night sky.

At a glance, a star chart will just look like a bundle of dots, lines and shapes on a piece of paper, but it is so much more than that. It may look confusing, but once you know the basics, you will be able to identify many stars, unique constellations and nebulae in the sky above you.

Just like a regular terrestrial map that we use to locate destinations on planet Earth, a star chart is a type of map that we utilize to navigate the night sky, and locate the stars. A star chart will demonstrate the brightest stars, objects and the stellar dome along with all of the constellations within the sky.

Generally speaking, a star chart will look like a white sheet, with black dots to signify stars and their locations. This is so astronomers can easily see the point of the stars on the map in the dark, and at nighttime, when stars are at their most visible.

A star chart will usually distinguish stars from the sky with dots or circles. These dots will vary in size depending on the brightness of the particular star. The larger the dot, the brighter the stars, and they will be equally more visible to you, and on the chart.

Star charts will have lines that describe star constellations, clusters of stars, and galaxies circled to help astronomers discover objects and locate them.

The lines will join together the brightest stars in a constellation and show the user where the constellation is and what it will look like. These dots are joined together that make unique patterns that are instantly recognizable for astronomy enthusiasts.

Just like you would use longitude and latitude on a map for Earth, on star charts we use right ascension (RA) and declination (dec). These are sometimes marked onto star charts and maps to help find points of interest in the sky.

These coordinates are measured in relation to two points within the sky. The first is the celestial equator, which is the line in the sky directly above the Earth’s actual equator. The second is the First Point of Aries, which is located in the constellation of Pisces.

On the other hand, the right ascension (RA) is measured at the distance along the celestial equator from the First Point of Aries. This is measured in hours, minutes and seconds rather than degrees.

This is measured in relation to one whole circle around the Earth, which is 24 hours, therefore if the RA of a star is 06h20m, then it will roughly be one quarter of the way around the sky from the First Point of Aries.

Where To Find A Star Chart

Star charts are easy to purchase online, if you prefer the real thing in your hands, such as the Celestron Sky Map or a Night Sky Star Finder Planisphere.

However, you can use a range of applications that are free to download to locate the stars, and find specific sky maps for your location!

How To Read A Star Chart

To read a star map or chart, you will want to ensure that you are facing in the correct direction. This means that you will need to have the North point on the map facing North.

It seems simple, but forgetting this step will make it very difficult to properly locate the stars and constellations that you want to find.

Once you have found the North, align this with the N on the star chart. You may also notice that the East and West are in the opposite positions than what we are used to seeing on regular maps.

This is due to the fact that maps for directing users to locations on Earth are meant to be used on the ground, or parallel to the ground, whereas star maps are to be used whilst held up in the sky.

The easiest way to begin learning how to read a star chart is to locate the biggest and brightest star constellations. These constellations have unique shapes and easily distinguishable outlines.

Once you have cracked their locations, and are confident in finding them, you will find it much easier to navigate through other objects in the sky in relation to the other ones that you have already pinpointed.

For example, one of the easiest constellations to locate is a group of seven stars called Ursa Major. This constellation is most commonly referred to as The Big Dipper.

Its recognizable shape is easily distinguishable from other stars in the sky, and will help you find its spot quickly and easily.

The Big Dipper is shaped like a bowl with a bent handle, and is easily located with its seven brightly shining stars! Its average RA is 10h 16m, and its average declination is 57 degrees 29’.

Once you can successfully find Ursa Major, or The Big Dipper, you can move onto other constellations and bright stars, to navigate your way across the night sky.

What Are The Easiest Stars And Constellations To Find?

If you want to be able to read star charts like a pro, then you will want to familiarize yourself with some of the most easily recognizable constellations, and star patterns in the sky.

Once you have located The Big Dipper, you should be able to familiarize yourself with The Little Dipper, also known as Ursa Minor, or The Little Bear. This constellation can be found by looking at the two stars that form a cup, and are in a pattern due north to the North Star.

The North Star is actually the brightest star in the Little Dipper, and is often an easy way to locate it. The average RA is 14h 58m, whilst the average declination is 75 degrees 2’.

You may have also heard of a constellation called Orion. This can sometimes be called The Hunter, and is also very easy to spot in the sky. To find Orion, you will need to look for three bright stars that look like they form a straight line much like a hunter’s belt.

From this point, you should be able to make out Betelgeuse, a bright star in what looks like the hunter’s armpit.

Other stars in the cluster seem to make out a hunter’s sword hanging from the belt, in this easily distinguishable constellation. For help in finding Orion, its average RA is 5h 34m, and declination is 3 degrees 35’.

If you can locate Orion, then you will be able to locate Taurus, or The Bull. This constellation is found just above Orion, and is often identified by its largest star Aldebaran.

This constellation is true to its name, shaped like a bull with horns. Its average RA is 4h 6m, whilst the average declination is 17 degrees 20’.

When you first start reading star charts, the many dots, lines and markings can be very confusing. To make things clearer, first look for the largest dots, as these will be the brighter stars and will therefore be easier to spot.

Once you are more comfortable locating the largest stars, then you can move onto the smaller dots that will be a little more challenging for you to find.

If you are having trouble locating constellations, or have located them, but then you seem to lose them on the map, feel free to draw over the line to highlight its location!

Remember that you will always want to keep your eyes sharp when locating stars in the dark. A regular flashlight will not help you locate stars and can startle your eyes, so you will need a red LED flashlight in order to read your sky charts in the dark!

Use online resources to help you navigate your way across the night sky. One of the best is this Star Chart Maker.