By the mid 17th century, telescopes had improved enough to make visible the seasonally growing and shrinking polar ice caps on Mars and features such as Syrtis Major, a dark patch thought to be a shallow sea - John Updike 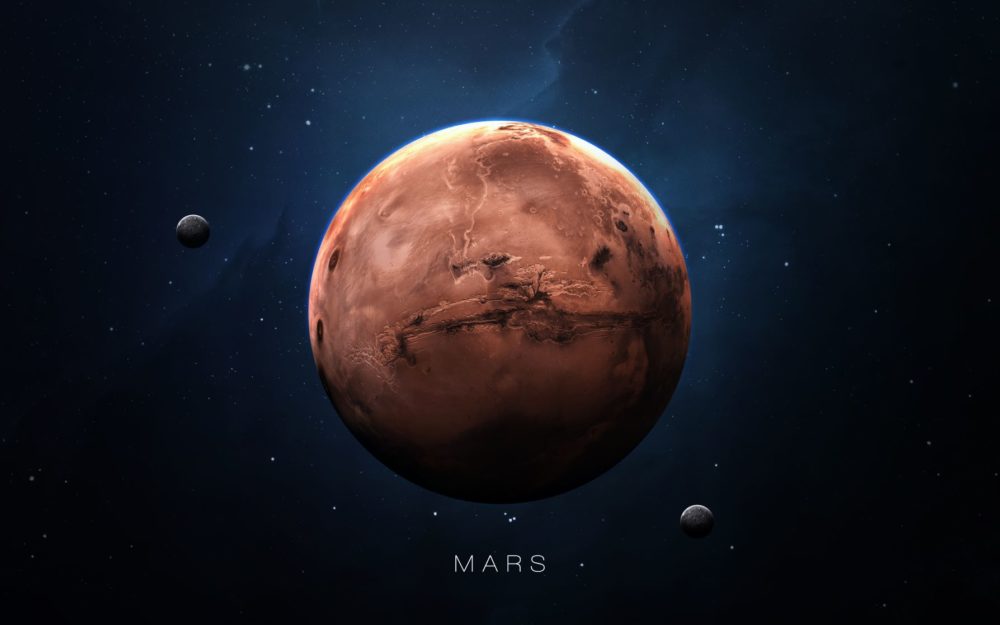 It’s a common astronomical misconception that every planet has at least one moon. While most of the planets in our solar system are orbited by smaller celestial bodies, neither Mercury nor Venus, the world's closest to the sun, have moons.

But they are the only planets in our solar system that don’t have any moons, and while our moon is easily observable, the duo that orbits the fourth planet from the sun Mars, aren’t so easy to see.

The Martian Twins - Phobos And Deimos

Discovered in August eighteen seventy-seven by the astronomer who also famously observed and noted the rotational pattern of Saturn, Asaph Hall, Phobos, and Deimos broke with the established astronomical tradition of being named after Roman deities and were instead named after the twins who, in Greek mythology, accompanied their father Ares into battle.

Thought to be closer in composition to asteroids than planets, both of Mars’ moons like our own are tidally locked, which means that much like our own moon neither Phobos nor Deimos rotates on their own axis and have always faced the same direction.

This has led to some scientists to believe that both were, at some point in the past caught in the gravitational field of Mars following a series of collisions in the asteroid belt.

Deimos, named after the Greek god of terror and dread, is the smaller of Mars’ two moons and has a radius of just three point eight miles.

Orbiting Mars at a distance of fourteen thousand five hundred miles, it shares a similar density to a D-Type asteroid, meaning that it is largely composed of silicates and ice.

Even though it is largely covered in impact craters, only two of Deimos’ geological and surface features have been named.

Voltaire and Swift were astronomically baptized to honor the writers who widely speculated that Mars had moons, a belief that was partially responsible for leading Asap Hall to search the Martian sky for any possible moons.

Unlike traditional moons, Deimos is not spherical, which was one of the factors that helped to fuel the speculative theory that it originated as an asteroid that was spent spiraling into the orbit of Mars following a period of instability and collisions within the asteroid belt.

While Deimos has been photographed by spacecraft sent to Mars by both NASA and the Russian space programs, no landings have been attempted on the surface of Mars' smallest moon.

Named after Deimos twin, the Greek god of panic and fear, Phobos is the innermost of Mars moons and orbits the planet at a distance of three thousand seven hundred miles and is closer to its main planetary body than any other known moon in the Solar System.

Because it is so close to Mars, Phobos orbits its planet much more quickly than the Red Planet rotates and orbits Mars every seven and a half hours.

The photographs that have previously been taken of Phobos by spacecraft sent to Mars have led scientists to speculate that the moon while resembling a C-Type asteroid in composition (mainly carbon, minerals, and other debris), is actually a rubble pile that is held together by a thin crust.

Phobos has a decaying orbit that gradually pulls it closer and closer to the surface of Mars by two meters every century and it is expected to either collide with Mars or break up and form a planetary ring in around thirty million years.

Unlike its twin Deimos, most of the surface features on Phobos have been charted and were named after the astronomers who discovered them or characters from Gulliver’s Travels.

Phobos is largely defined by an impact crater called Stickney which is nine kilometers in diameter and makes up most of the surface area of the moon.

Many astronomers have theorized that the impact that led to Stickney’s formation almost destroyed Phobos and was directly responsible for its incredibly close orbit to its parent planet.

Astrologically speaking both of Mars’s moons are incredibly small which makes it difficult, but not impossible, to see them.

As both moons are closer in composition to C and D-Type Asteroids, they have low albedos (meaning that they absorb almost all of the incoming solar radiation that hits them and only reflect around a tenth of it back into space) which means that celestially speaking, they’re dark.

Their size and stygian appearance are an astronomical nightmare, and it’s this less than perfect pairing that makes them so hard to observe.

How To See The Martian Moons

As we’ve already mentioned, difficult isn’t impossible and if you want to see the Martian moons, the best opportunity that you’ll have to do so is during a planetary opposition.

Every object in the night sky has magnitude, which is a measurement of how bright and easy to see they are. Phobos, even though it has a larger mass than Deimos, has a magnitude of eleven point seven, while the smaller of the two moons has a magnitude of twelve point eight.

This means that even though Phobos is bigger than Deimos, it’s more difficult to see in the night sky.  Size isn’t the issue when you’re trying to see Mars’ moons, the proximity to the Red Planet and the speed at which the moons orbit the planet are all that matter.

As Phobos is far closer to the surface to Mars than Deimos is and its orbit carries it across the Martian sky once every seven hours, it’s harder to track and see than Deimos, which while smaller than its twin, orbits much more slowly, completing a single rotation in around thirty hours and at a distance of twelve thousand four hundred and seventy miles, and is much further away from the Martian surface.

The best way to see either of the moons is with a sufficiently powerful telescope, which should ideally have at least a six-inch aperture and have been purposely designed for planetary observation.

And, as we mentioned earlier, the best time to train your telescope on Mars to see either Phobos or Deimos is the opposition between Mars and Earth.

The next opposition is due to happen in December two thousand and twenty-two, at which point Mars will only be thirty-eight and a half million miles from Earth.

Having said that, even at that distance, both Phobos and Deimos will barely be bigger than dark spots moving across the Martian sky, but at least you’ll be able to see them.

Some Additional Moon Based Pointers

We’ve already mentioned that the most likely time to spot Phobos and Deimos is during an opposition, but there are some additional pointers that can aid you on your quest to see both.

The position of the moons is everything, and the best chance that you’ll have to see them is when either are in their Easter and Western elongations, which is when they’re at their furthest from Mars.

Finding out when that will be has never been easier thanks to free software like Stellarium which has been designed to recreate a planetarium on your home computer and will tell you the times and dates, during the opposition, when both moons are in the optimal position for you to train your telescope on them.

You can also increase your chances of seeing either, or both, Phobos or Deimos by fitting an occulting bar (which will occlude Mars from the lens of your telescope) to your telescope and by using a blue filter which will reduce the planetary glare from Mars and make it far easier to see its moons.

So while it might be difficult to observe Phobos and Deimos, it’s far from impossible. It just takes a little patience and know-how, both of which will be rewarded when the Red Planets’ moons swing into view.