Uranus is the 7th planet from the sun and is one of only 2 ice giants in our entire solar system (the other is Neptune.) This means that Uranus is subjected to some very extreme weather conditions, including sub-zero temperatures and bone-chilling gale-force winds. If you’ve ever seen a picture of Uranus, you’ll be familiar with its blue-green hue. This is a result of the atmospheric makeup of Uranus, which is primarily hydrogen and helium.

Uranus was even the first planet to be found using a telescope. This occurred in 1781 thanks to astronomer William Herschel. He originally identified it as a comet, but after significant observation, it was determined to be a planet. Herschel initially wanted to name the planet “Georgium Sidus,” as an homage to King George III. Instead, it was named Uranus by Johann Bode. Despite how hilarious this planet may sound, it’s in fact named after the Greek God of the sky. Regardless, Uranus still finds itself at the butt of all solar system jokes. 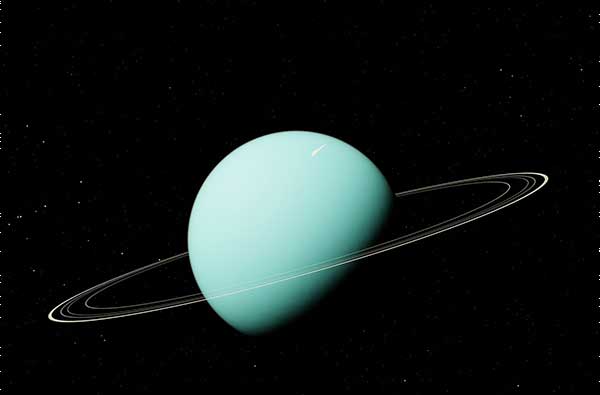 How far away is Uranus from the Sun?

Uranus lies over 2.88 billion km away from the Sun, 2,876,679,082 km to be exact. This distance in miles translates to around 1.79 billion miles. This number is just an average, calculated by NASA. Much like many other planets in our solar system, Uranus follows an elliptical orbit around the Sun once every 84 Earth years. At its closest point, also known as the perihelion, Uranus gets within 2.75 billion km of the Sun. On the other hand, at its most distant point, called the aphelion, Uranus gets within 3 billion km from the Sun. On average, the planet travels about 19 times as far from the sun as Earth does.

Due to this massive distance between Uranus and the Sun, the planet draws very little warmth and light from the star. In fact, Uranus is the coldest planet in our solar system. The temperatures on Uranus can reach as low as minus 371 degrees Fahrenheit, creating conditions that we couldn’t even imagine. This is why Uranus is mostly made up of ice, rather than gas.

How far away is Uranus from Earth?

It’s quite difficult to pinpoint an exact distance between Earth and Uranus, this is because the solar system is constantly in motion, therefore the distance between the two will be different every single day. The closest they get to each other is believed to be 1.6 billion miles (roughly 2.6 billion kilometers).

At their farthest from each other, the Earth and Uranus lie 1.98 billion miles (3.2 billion km) apart. This is why Uranus was one of the last planets to be discovered, as it cannot be observed with the naked eye. This is still the case even when Uranus is at its closest point to the Earth and shines at a magnitude of 5.7. Essentially, if you plan on observing Uranus from Earth, you’ll have to know exactly where to look. Also, you’ll require a telescope too.

How long would it take to reach Uranus?

While human voyages to Venus and Mars are something that astronomers and scientists have been considering for quite some time and seem very attainable, such trips to Uranus simply are not a possibility. Due to Uranus’ orbits taking nearly a century to complete, it can take years before the planet is even lined up enough to attempt a voyage.

Regardless of its lengthy orbit, Uranus has been greeted by human creations. In August of 1977, NASA's Voyager 2 passed Uranus on its way out of the solar system. It witnessed all four gas giants, making its closest approach to Uranus on January 24th, 1986. So, it took just under a decade for a spacecraft to reach the icy giant.

Light is the fastest traveling thing known to exist. This is primarily due to its lack of mass. The speed of light is a staggering 186,282 miles per second. This is why you may be aware that light takes roughly 499 seconds (8 minutes) to reach Earth from the Sun. A rundown of how long light takes to travel to Uranus is expressed below. These figures have been converted into an Astronomical Unit for your convenience.

If we look at the average distance (2.5 billion km), it takes 2.5 hours for light to reach Uranus from here on Earth. Because of this, if you observe Uranus through a telescope, you’re actually looking at it in the past. The Uranus that you can see is how it was 2 and a half hours ago.

How long does a day last on Uranus?

Uranus rotates almost 90 degrees from the plane of its orbit. This unique tilt gives the impression that Uranus appears to spin on its side, orbiting the Sun almost like a rolling ball. This bizarre tilt is the reason why a day on Uranus is the same as an entire season on Uranus. Although the planet is rotating on its axis, the Sun will just spiral around in the sky until the planet has gone far enough around the Sun for it to be obscured.

How long is a season on Uranus?

Much like here on Earth, Uranus also experiences four separate seasons too. However, that is where the similarities end. For example, the seasons on Uranus are much longer than our usual season here on Earth. As the Earth takes 365 days to complete an orbit around the Sun, each season lasts roughly 91 days. However, on Uranus, it takes 84 years to complete just one orbit of the Sun- this translates to each season on Uranus lasting 21 years!

At the North and South poles of Earth, it is common to only receive a few short weeks of sunlight, and sometimes none at all. Although this may sound terrifying, it is nothing compared to Uranus. The winter season on the ice giant involves a full 21 years without any sunlight at all! On the other hand, the summer season on Uranus consists of 21 years of continuous daylight.

While we are able to calculate how long it would take for us to reach Uranus, it is all very much hypothetical at the moment. Although we’ve managed to send a spacecraft past Uranus, it’s highly unlikely that humans will be able to experience it up close. This is because of its turbulent atmosphere, its lack of a surface, and of course, the sheer distance between it and Earth.