I still remember the first I pointed a telescope at the sky and saw Saturn and its rings. It was a beautiful image - Umberto Guidoni

Known as Phainon (the sky god of Kronion) by the ancient Greeks, Saturn was first studied by Babylonian astronomers nearly three millennia ago.

One of only five planets visible from Earth with the naked eye, Saturn is the second-largest world in our Solar System and is a gas giant whose radius is nine times the size of Earth.

While it may have a solid core, Saturn is believed to have no planetary surface and is composed mainly of hydrogen and helium. 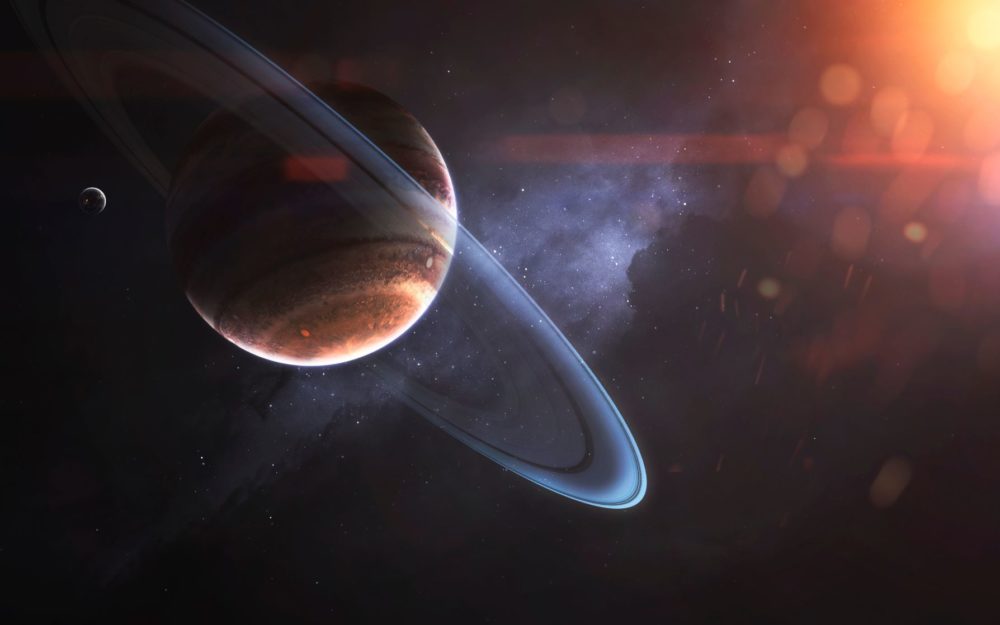 The sixth planet from the Sun, Saturn is most famous for its distinctive planetary rings, which have built up over time as large particles and blocks of ice and rock, all of which were caught in its gravitational well.

Stretching from a distance of four thousand one hundred and twenty miles outward from the planet’s equator to seventy thousand miles, they were first observed by Galileo in sixteen ten.

These rings are thought to be either leftover debris from the original planetary material from which Saturn was formed or the remnants of a long destroyed moon.

Even though it is only the second-largest planet in the solar system, Saturn has the most moons (three more than Jupiter) with fifty-three having been identified and a further twenty-nine being unnamed.

Saturn is also thought by most astronomers to have hundreds of “moon-lets” between forty and five hundred meters in diameter within its rings.

The largest of Saturn’s moons, Titan is the only planetary satellite in the solar system known to have an atmosphere in which complex chemical reactions occur and, and whose surface is dotted with hydrocarbon lakes, both of which are ideal conditions for the formation of microbial life.

However, it isn’t the only one of Saturn’s satellites thought to be able to sustain life as Enceladus, Saturn’s sixth moon is thought to be composed of liquid water trapped within a thick crust of sheet ice that occasionally cracks and expels liquid matter due to the gravitational effect of its parent planet.

Named after the Roman god of agriculture and wealth, Saturn in the mythology of the civilization who formerly gave it a name is the father of Jupiter.

Thanks to the nature of its rotation, Saturn isn’t a true sphere, but is actually a spheroid as both of its equators are flattened while it’s axes (when viewed through a telescope) appear to bulge, making Saturn a spheroid and not a true sphere.

How Far Is Saturn From The Centre Of Our Solar System?

Saturn, like all of the other planets in the solar system, follows an elliptical orbital pattern around the Sun, which lies at the center of our solar system. This means that the distance between the Sun and Saturn is never constant, but tends to vary due to the nature of its orbit.

How Far Is It From Earth To The Sun?

Unlike the distance between Saturn and the Sun (which is regarded as being a fixed point in our solar system but in actuality orbits and revolves around the center of our galaxy, the Milky Way), the distance between Earth and Saturn isn’t set and varies due to the orbits of both planets.

At its closest point to us, which is referred to by Astronomers as opposition, the distance between Earth and Saturn is seven hundred and forty-six million miles and happens when both planets are on the same side of the sun and align with each other in their orbital paths.

This happens once every fifty-four weeks, and at this point, Saturn is larger and brighter in the night sky than it is at any other time.

However, while it can be seen in the sky with the naked eye at this point, it’s impossible to distinguish Saturn from a star and in order to see it properly, and maybe even catch a glimpse of its famous planetary rings, you’d need to view it through a powerful telescope that was designed for planetary observation.

Paradoxically, when Saturn’s orbit takes it behind the sun, and Saturn, the Sun, and Earth are in a direct line, this is known as planetary conjunction and at this point, Saturn is at its furthest point from Earth.

When Saturn and the Earth are in conjunction, Saturn is almost a billion miles, or nearly ten astronomical units, away from Earth.

At this point, it’s impossible to see Saturn from Earth, not just because of the distance involved, but also because it is passing behind the sun.

Traveling To Saturn At The Speed Of Light

Now that we know how far Saturn is from Earth, we can use these distances to calculate how long it would take to get from our world to the famous ringed planet of Roman legend.

The first calculation that every astronomer makes when attempting to figure out how long it would take to travel between two planets, is how long it takes light to make the same journey.

At its closest point to Earth, Saturn is seven hundred and forty-six million miles away, which means that it’s just over eight astronomical units away.

This means that when Saturn is closest to earth it would take one hour and four minutes for light to travel between the two planets.

If we do the same calculation for how long it would light to travel from Earth to Saturn when the planets were at their furthest point from each other, which is given or take thousand miles or so, a billion miles, we have to multiply ten (the distance in astronomical units that Earth is from Saturn at its furthest point) by eight (the time it takes for light to travel one astronomical unit), which give us a figure or roughly eighty minutes, or one hour and twenty minutes.

And at the median point, when Earth is nine astronomical units from Saturn? At that point in both planet’s orbital trajectories, it would take about seventy-two minutes, or one hour and twelve minutes for light traveling from Earth to Saturn to reach the gas giant.

How Long Would It Take Humans To Reach Saturn?

Give the number of different factors involved, including launch windows, the relative distance between the two plants at any given time, and the level of present technology available to us, the easiest way to calculate the journey time for a manned mission to Saturn, is by working out the average journey time of the slowest and fastest unmanned missions to the gas giant.

The slowest journey to date was undertaken by Mariner Four which launched on April 5th, nineteen seventy-three and took until the closing minutes of nineteen seventy-seven to reach Saturn, and had a flight time of six years and four months.

Taking both of those figures into consideration, and allowing for supplies, extra weight, and the additional journey time that all of the flight’s safety factors would have to include, it would take the average manned mission if it were to launch sometime in the next decade, around five years to reach Saturn.

Saturn rotates at a much faster speed than Earth does, which considerably shortens the length of its day. An average day on Saturn lasts just ten and half hours, but that isn’t the strangest part of the way time works differently on the gas giant.

Which is a long time to spend in space for any astronaut who might be thinking of voyaging to the ringed planet.