Neptune is one of the planets that many people can name (even if they forget most of the others). This is partly due to it being named after a famous god. But also because of its stunning colors.

But it is also well known because it is the planet furthest away from the Sun. So, whatever rhyme or mnemonic you were taught to help you remember the order of the planets, Neptune was either first or last. 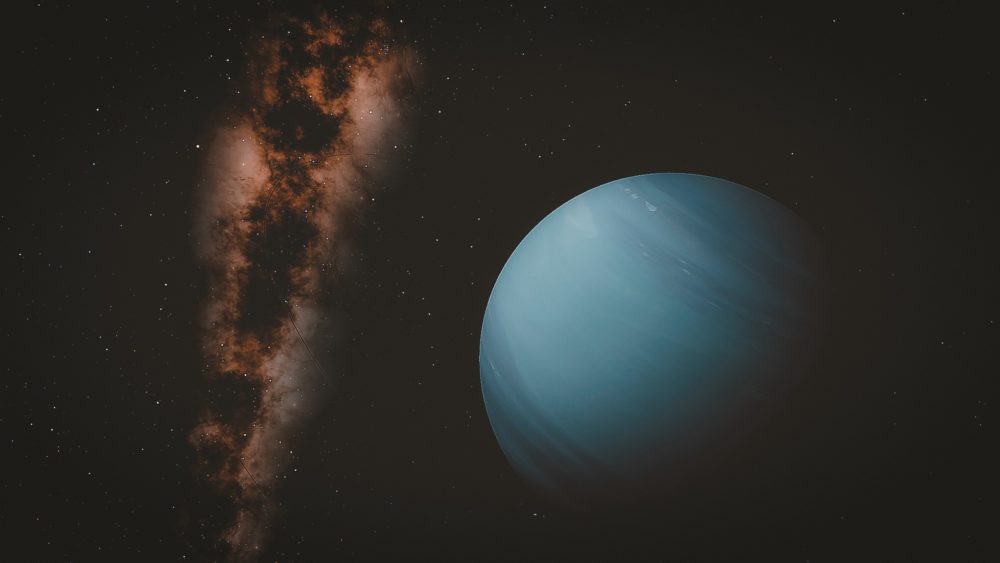 So, how far away is Neptune from the Sun and the Earth? Well, that depends on whether we’re speaking in miles, kilometers, or lightyears.

Here’s a breakdown of exactly how far away Neptune is from the Sun and the Earth.

Neptune is a stunning 2.7 billion miles away from the Earth. This is difficult to comprehend and makes it truly amazing that we can still see it from Earth.

To put this in some perspective, the Moon is 238,855 miles away from the Earth. This should give you some concept of just how huge our solar system is.

From the Sun, Neptune is 2.8 billion miles away. This might be quite a shock as you might not have realized just how far away the Sun is from the Earth. These numbers are pretty difficult to consider.

If you don’t work in miles and can’t quite conceptualize this, the distance between the Earth and Neptune in kilometers is 4.5688 billion.

The distance between the Sun and Neptune in kilometers is 4.759 billion.

First of all, let’s go over exactly what we mean by “light years''. This is the unit of measurement used to measure distance in space. But what exactly is it? “Light years” refers to the length of time it takes for light to travel.

So if one object is referred to as “1 light year” away, this means that it takes one year to travel between the Earth and the object. One light year is equal to around 6 trillion miles or 9 trillion kilometers.

How long does it take to reach Neptune?

Neptune has never been walked on by human beings. Although it doesn’t take very long for Neptune’s light to reach the Earth, that doesn’t mean that it only takes 4 hours to reach Neptune.

But, there has been a spacecraft visit to Neptune. This spacecraft, the Voyager 2, went up to Neptune in 1977. It reached Neptune in 1989. So, it took around 12 years to reach Neptune. But, that was with 1970s technology. So much more could be done now or in the future.

Now you know exactly how far away Neptune is from both the Earth and the Sun, here are some more interesting facts about the planet Neptune.

This means that it takes 165 Earth years for Neptune to orbit the sun. But this is not in a straight or circular line. All planets orbit each other. So Neptune isn’t always orbiting in the same place.

This seems quite the difference when one year takes so many Earth years. This means that it takes Neptune only 16 hours to rotate on its axis.

This means that it cannot be seen by the naked eye on earth. But it can be easily seen through a standard telescope. So, if you have a telescope, you should be able to see it when it is next visible where you are. Remember, it won’t always be in the same place.

You probably knew this one but it’s still interesting enough to repeat. Neptune was the Roman god of the sea. But the naming of Neptune was not an easy process.

After Neptune was (officially) discovered in 1846, there were some disputes over the naming. Neptune was discovered by Johann Galle and Urbain Le Verrier.

Galle originally put forward the name “Oceanus”. Whereas Le Verrier suggested the name Neptune but then later attempted to name it after himself.

Le Verrier even went so far as to falsely claim that the Bureau des Longitudes had approved this name. Many people outside of France disagreed with Le Verrier naming the planet after himself.

There were some other options suggested and other astronomers came out in support of the name Neptune. The suggestion for naming the planet “Le Verrier” then quietly went away and Neptune was officially named.

This is the nickname given to planets that are incredibly cold. This is because they are so far away from the sun. Neptune is in fact the coldest planet in our solar system.

Temperatures can get as low as -366.6°F. This status used to belong to Pluto. But Neptune gained the position after Pluto was downgraded in 2006.

Neptune’s oceanic name suits its blue coloring. But it also suits its weather. Neptune is named after the god Neptune who had the power to control the waves.

The majority of art that depicts Neptune includes a lot of wind that is whipped up into a frenzy that then whips the waves.

Although there is a small amount of water present on Neptune (but it is ice due to the temperature), the image of the wind is not entirely inaccurate.

The supersonic wind on Neptune can reach speeds of up to 2,100km/hr. That is incredibly fast. Neptune has the fastest winds of all the planets in our solar system.

In 1612 and 1613, Galileo, after making observations of the night sky, recorded seeing what he believed to be a fixed star. When his records were compared with the modern plotting of Neptune, they matched.

Galileo cannot be given the sole credit for discovering Neptune as he did not classify it as a planet, nor did he name it or give it any official status. But this is only due to a small technicality.

This technicality was the date. Had Galileo observed Neptune later in the year, he may have realized that it was a planet. But, on the dates he recorded his observations, Neptune had just begun its yearly retrograde.

So it appeared stationary. When he observed it again, Galileo noted that the “fixed star” had moved but still did not consider it to be the orbit of a planet.