Mars is there, waiting to be reached - Buzz Aldrin

A subject of human fascination since the beginning of recorded history, the Red Planet is one of Earth’s closest celestial neighbors, but it still seems like it’s an impossibly long way away.

Named after the Roman god of war, Mars has long been the focus of science fiction stories and speculative tales about little green men and ancient war machines spreading their wings and leaving the dusty surface of their home behind to colonize and conquer the third rock from the Sun, Earth. 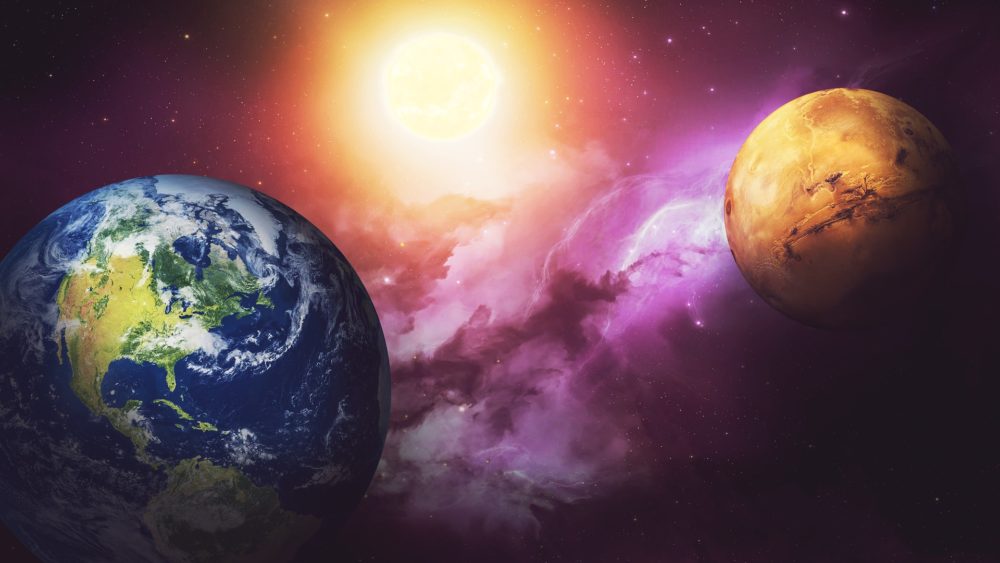 While we know that life failed to flourish on Mars if the fictional beings that were popularised in the pages of pulp fiction magazines and during the Golden Age of science fiction had decided to swap their homeworld for a more hospitable environment, how far would they have had to travel?

And if, and when, humanity decides to venture to Mars, what kind of cosmic distance would we have to cover in order to land on Olympus Mons?

The Distance From Here To There - How Far Is It Mars?

The answer to this question is a little more complicated, and not quite as straightforward, as you might think.

If you were to ask any keen astronomer what the distance from Earth to Mars is, they’d probably answer, without hesitation, that the average distance between the two planets is somewhere in the region of one hundred and forty-two million miles.

And then they’d quickly quantify the operative word in that answer by expanding their previous statement to explain that sometimes it’s a lot closer than that and at other times, it’s a lot further than that.

Sometimes Mars Is Closer And Sometimes It’s Further Away

The idea, from an Earthbound point of view, that the distance between two places could differ so radically seems a little confusing, but there’s a simple explanation for it.

We think of distance as being a figure that never changes because all of the locations on our world remain at fixed points on the planet’s surface.

That changing distance due to the Earth and Mars’ different orbits around the Sun?

The ever-changing amount of space that separates Earth and Mars is entirely due to the different orbits of the planets. Earth is locked into an elliptical orbit around the Sun while Mars is the subject of a far greater oval orbit around our Solar System's star.

This means that it takes Mars twice as long to complete a single orbit of the Sun as it takes Earth, which also means that a Martian year is almost seven hundred and fifty standard Earth days.

Even though it’s nearly always a permanent fixture in our night sky, due to the previously mentioned different orbits of both planets, there are times when Mars is, according to our relative position in the Solar System, behind the Sun.

When this happens, and Mars, the Sun, and Earth are all in alignment, this is commonly known as conjunction and this is when Mars is at its furthest point from Earth.

At this point in its orbit, Mars would be impossible to reach as the Sun lies directly between Earth and the Red Planet, and at this distance, Mars is somewhere in the region of two hundred and forty-nine million, one hundred thousand miles away from us.

It was during the opposition of eighteen seventy-seven when the idea that there were canals on Mars was first mooted by the Italian astronomer Giovanni Schiaparelli, which in turn led to the widespread belief that some sort of advanced civilization had developed on Mars.

But Mars Does Get Closer

Thanks to the orbital paths of the Earth and Mars, there is a point at which both planets are on the same side of the Sun, and when Earth lies directly between the Sun and Mars, it’s known as planetary opposition.

This is the point during both planets' orbits when any keen stargazer should direct their telescope toward Mars, as it’s relative proximity at this moment means that it’s close enough to Earth for us to see planetary features on the fourth world from the sun with help of a little magnification.

A mere thirty-nine million miles away at this point, it’s possible to see and identify specific parts of the Martian landscape from almost anywhere on Earth. Providing of course, that you’re using a telescope to observe them.

Due to the nature of both planets’ orbital trajectories, opposition isn’t a common celestial occurrence and happens roughly once every twenty-six months.

And even when it does happen, the distance between Earth and Mars is dependent on the orbital position of both worlds when they pass each other. The closest that we’ve been to Mars was in two thousand and eighteen when we came within thirty-four million miles of our second closest planetary neighbor.

By comparison, the next time that we’re due to enter into opposition with Mars, which is during December two thousand and twenty-two, we’ll be something like fifty million miles away. That difference in distance? It’s all due to the points in which our orbital paths cross.

And then there’s the point at which we’re further from Mars than we are at any other in the orbital journeys of both worlds, conjunction, the next occurrence of which is due to happen in November two thousand and twenty-three.

And when it does, Earth will be two hundred and thirty-five million miles away from Mars.

Taking both conjunction and opposition into account and factoring in the increasing and decreasing distance between Earth and Mars is something that every astronomer does on an almost daily basis, which is why when you ask them how far away from Mars we are, they’ll almost always say “One hundred and forty-two million miles”.

Because it’s infinitely easier to answer with a number than trying to explain conjunction, opposition, and the constantly varying solar distance between Earth and Mars.

It’s a given that at some point human beings are going to land on the surface of Mars.

NASA has estimated that the earliest date at which they’ll launch their first manned mission to Mars is two thousand and thirty, and even though they haven’t offered a definitive timeframe for long it will take the flight to reach Mars, we can make a pretty conservative estimation give or take a month or two.

We know that it takes light, traveling at one hundred and eighty-six thousand miles a second, between four and twelve minutes to cross the void between Earth and Mars, depending on the distance between the worlds at any given moment in time.

Which means that we can, given the time that we know that it took previous missions to reach Mars, make a good guess at how long it will take the first NASA mission to reach the Martian surface.

Taking those numbers into account, and the distances between Earth and Mars, the need to conserve fuel and supplies and make course corrections (because no mission to Mars ever flies in a straight line between here and there as said straight line only exists for the briefest if planetary moments) it would take between one hundred and fifty and three hundred and fifty days to reach Mars from Earth.

Having been exposed to the inner workings of bureaucracy on multiple occasions and knowing that the primary objective of any government body is to make sure that they can squeeze every last cent out of every dollar, and knowing NASA’s funding, or rather lack of it, issues, we know that they’ll be keen to spend their available budget for the Martian mission as wisely as they can.

This means that they’ll almost certainly follow a cautious flight plan, which will exponentially increase the flight time of the mission to ensure the safety of the crew and that they can minimize any potential risk to the spacecraft and reduce the risk of anything going wrong.

In all likelihood, this will mean launching closer to a Martian opposition than conjunction, which will probably result in a flight time of around two hundred and seventy days. So how long will it take to reach Mars?

It’ll probably take around nine months from blast off to landing, and each and every moment of it will be a glorious adventure for all of humanity and our first step in the journey to reach beyond our Solar System.