Jupiter is the largest planet in the solar system and named after the Roman King of the Gods.

The first observations of this gas giant were made by Galileo Galilei in 1610 with a small telescope- and we haven’t looked back since. 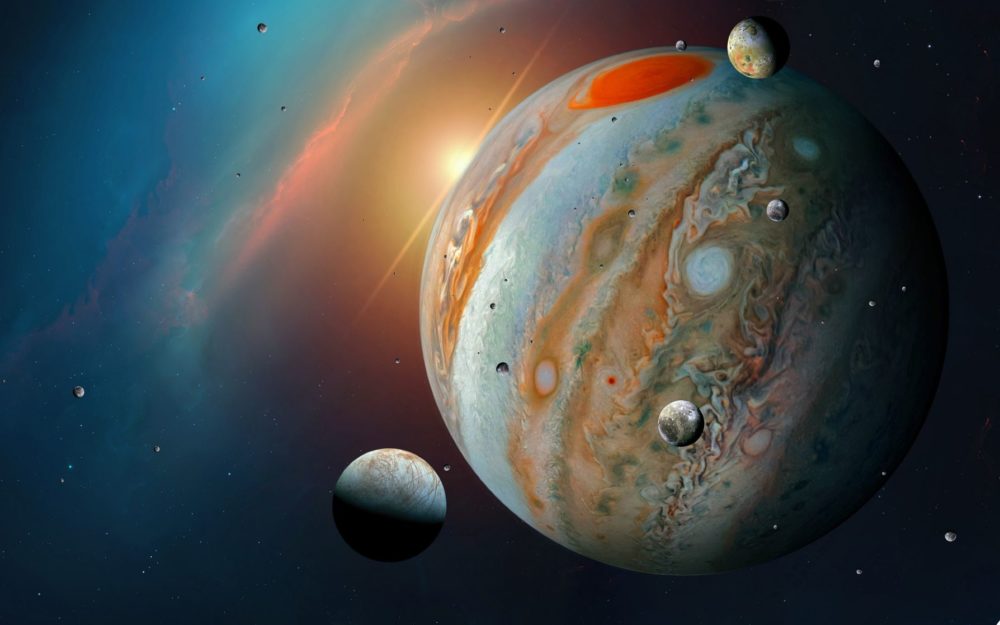 We’ve uncovered all sorts of information about Jupiter in recent years. We know all about its whopping 67 moons, The Great Red Spot, and its diamond rain showers.

But perhaps the most mind-blowing thing about Jupiter is just how far away it is.

How Far Away Is Jupiter from Earth?

The distance between Jupiter and earth changes over time. This is because Jupiter orbits elliptically around the Sun. At certain points in time, the planets are 365 miles apart.

The two planets can be more than 600 million miles apart at other points, which can affect the time it would take to travel between them.

Jupiter takes precisely 11.86 Earth-years to complete one orbit of the sun. As Earth travels around the sun, it catches up with Jupiter once every 398.9 days, causing the giant planet to appear to travel backward in the night sky.

This retreating motion caused much confusion. This is because the original “Copernican” understanding of the solar system was based on the notion that planets followed a perfectly circular orbital path.

It took until Johannes Kepler determined that planets traveled in elliptical paths rather than circular ones to shed some light on the situation.

When is Jupiter Closest to the Earth?

In order for the gap between Earth and Jupiter to shrink, they must be in a line on the same side of the Sun. At its very smallest, the distance between the Earth and Jupiter is 587 kilometers, which is fairly close in terms of distance in space.

Due to the planets’ elliptical orbit, Jupiter gets this close to earth every 13 months. If you’re hoping to catch a glimpse of the gas giant next time it comes around, here’s when you can expect to see it up close:

When is Jupiter Closest to the Sun?

If two celestial bodies are in the same orbit, there will be a point where they both rotate, this tends to be nearer the larger body. In this case, it’s of course, the Sun.

Due Jupiter’s sheer size, the center of mass within the sun-Jupiter system actually lies outside of the diameter of the sun. In fact, it’s the only planet whose center of mass is not located with the solar boundaries.

How Long Does it Take to Reach Jupiter?

The time it would take for a spacecraft to reach Jupiter depends on many different factors. The path of a craft often varies, as the orbital path will cause you to slingshot off of planets, moons, and even the sun to gain acceleration.

NASA launched the Galileo spacecraft in October 1989 and it took just over six years to reach Jupiter. It officially arrived in December 1995.

The reason why it took so long is because the spacecraft decided to take the scenic route. In total, it traveled a whopping 2.5 billion miles. On its travels, Galileo traveled around Venus, Earth, and the asteroid Gaspra to reach Jupiter.

On February 28, 2007, it passed Jupiter on its way to Pluto and other dwarf planets. The travel time to Jupiter was just over 13 months. The time it took each mission to travel Jupiter varied, and depended on many factors including, acceleration, propulsion and orbit.

How Long Does Light Take to Travel from Jupiter to Earth?

As the planets orbit the Sun, this time varies between 32 minutes 7 seconds, and 54 minutes 25 seconds.

Because of this, when you see Jupiter or its moons in the night sky, you are looking at them as they were 32 minutes and 7 seconds ago.

Of course, these numbers are only applicable light, and light travels at a mind-boggling speed of 186,282 miles per second. However, we are unable to travel this fast.

What would happen if humans attempted to land on Jupiter?

While it is exciting to talk about a possible voyage from Earth to Jupiter and how long it would take, it would be pretty much impossible to try to land a spacecraft on it.

We’ll probably never fully understand Jupiter because of this. Jupiter doesn’t have an outer crust like we have here on earth, it is merely an endless stretch of atmosphere that you will fall into.

At this point, you may be imagining someone falling straight through Jupiter and out through the other end, much like a cloud. However, it isn’t as straightforward as this.

If you found yourself falling through the atmosphere of Jupiter, you wouldn’t even make it half way through.

For a start, as soon as a spacecraft gets close enough to Jupiter to prepare for a landing, the giant planet’s atmosphere generates crushing pressures and inferno-like temperatures that would kill off any life in its path instantly.

Just to put it into perspective, the temperatures around Jupiter’s atmosphere are hot enough to melt tungsten - the metal with the highest known melting point.

Unfortunately, the odds are stacked against us and it is unlikely that we will ever get to experience Jupiter up close and personal.

In fact, any aircraft that gets close enough is going to be destroyed before it gets there. The mystery of our gas giant will continue to boggle minds and frustrate scientists for many years to come.