As the fifth planet from the sun, Jupiter is, by far, the largest planet in our solar system. However, the curious people that didn’t study Physics might be wondering: just how big is Jupiter?

In the following article, we discuss how big Jupiter is, how much bigger it is than Earth, and its mass comparison to Earth, alongside other interesting discussions! So let’s break it down. 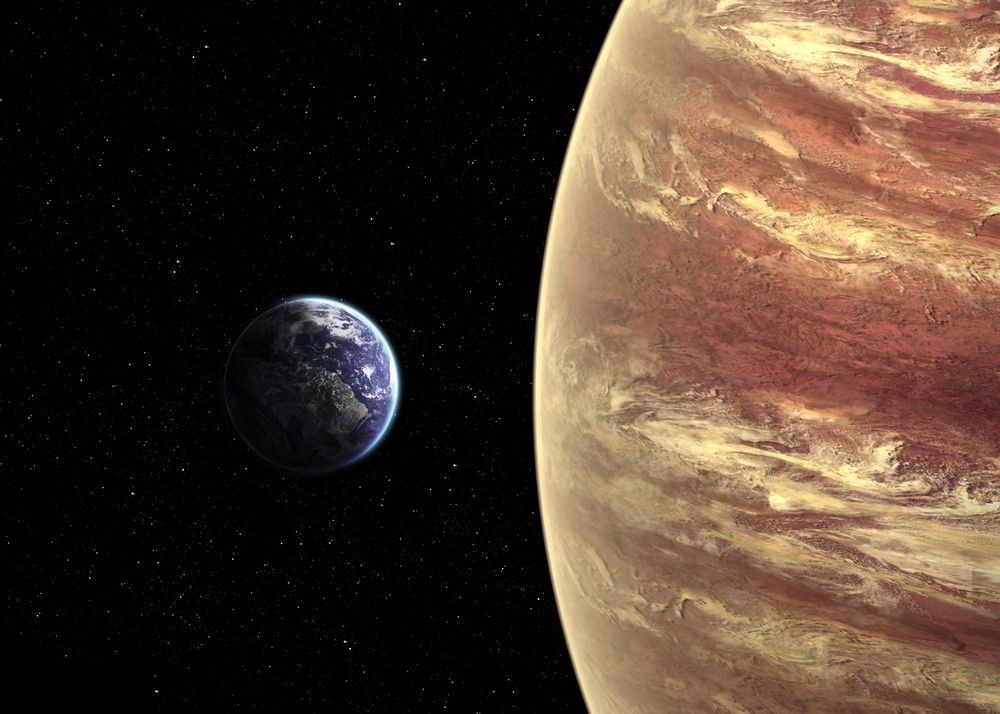 How big is Jupiter?

With a radius of 43,440.7 miles (69,911 kilometers), Jupiter is 11 times the size of Earth and 317 times its mass. In fact, it is more than twice as massive as all of the other planets combined. That’s pretty impressive, right?

Despite its gigantic size, Jupiter has the shortest day of any other planet. In fact, it only takes around 10 hours for a complete rotation! For context, then, Jupiter makes a complete orbit around the Sun (a year in Jovian time) in about 12 Earth years (4,333 Earth days).

From an average distance of 484 million miles (778 million kilometers), Jupiter is 5.2 astronomical units away from the Sun.

The rapid speed that Jupiter rotates at causes it to bulge at the equator, where the diameter is 88,846 miles (142,984 km), causing its stretched shape that is commonly known as an oblate spheroid.

How much bigger is Jupiter compared to Earth?

In comparison to Earth, Jupiter is much, much bigger. In fact, as the biggest planet in our solar system, Jupiter’s name comes from the king of the ancient Roman gods.

With a radius of 43,440.7 miles, compared to Earth’s 3,963 miles, Jupiter is 11 times the size of Earth. To put it simply, then, if Earth were the size of a nickel, Jupiter would be about as big as a basketball.

The size of Jupiter’s volume is even more impressive! More than 1300 Earths would fit inside Jupiter.

What’s the mass comparison between Jupiter and Earth?

When you look at the mass comparison between Jupiter and Earth, Jupiter is even more interesting to study.

Jupiter’s mass is 2.5 times that of all the other planets in the solar system combined. However, as a gas giant, Jupiter doesn’t have a true surface, as the majority of the planet is mostly swirling gases and liquids.

As a result of the fact Jupiter’s mass is mostly made up of gas, it is much less dense than Earth so, despite the fact it is 1,300 times the volume of Earth, Jupiter has a mass equal to 317 Earths!

Despite its gigantic size as the largest planet in our solar system, so big you’d need 317 of our Earth to achieve the same mass, Jupiter has the shortest day of any planet! Mind-boggling, right?

Much like the Sun, Jupiter is mostly composed of hydrogen, with a quarter of its mass being helium. Jupiter's multi-colored appearance is made out of cloud bands and spots.

It is thought that the gas giant likely has three distinct cloud layers in its "skies" that, taken together, span around 44 miles.

The Great Red Spot, a swirling oval of clouds twice as wide as Earth, has been observed on Jupiter for more than 300 years and is a persistent high-pressure region in the atmosphere.

The Great Red Spot is located 22 degrees south of Jupiter's equator and produces wind-speeds up to 432 km/h (268 mph). The Great Red Spot, then, is a gigantic storm that you could technically fit the earth into twice. Now that’s impressive!

Deep in the atmosphere, the pressure and temperature increase, compressing the hydrogen gas into a liquid. This gives Jupiter the largest ocean in the solar system. However, unlike the oceans we’re familiar with on Earth, Jupiter’s ocean is made of hydrogen instead of water.

How many moons does Jupiter have in comparison to Earth?

Compared to Earth, which only has one moon, Jupiter essentially forms a miniature solar system. With four large moons and many other smaller moons, Jupiter has 53 confirmed moons and 26 provisional moons that are awaiting confirmation of their discovery, making 79 potential moons in total.

Jupiter also has several planetary rings surrounding it, but unlike the famous rings of Saturn, Jupiter’s rings are incredibly faint and are made of dust as opposed to ice.